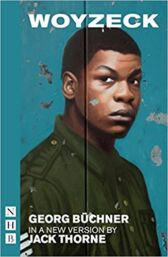 "People like us are unhappy in this world and in the next: if we made it to heaven, we'd have to help make it thunder"

The multi-award-winning Jack Thorne - the playwright behind Harry Potter and the Cursed Child - breathes new life into Georg Büchner's existential masterpiece, Woyzeck, one of the most extraordinary plays ever written

On the border between East and West, a young soldier and the love of his life are desperately trying to build a better future for their child

Jack Thorne's version of Woyzeck premiered at the Old Vic Theatre, London, in May 2017

'An exceptionally powerful portrait of a man at the bottom of the heap, helpless and hopeless' ~ Mail on Sunday

'A brutal interpretation for our times' ~ Observer

'A thrillingly powerful triumph as a picture of working-class men, this Woyzeck is powerful and effective' ~ The Arts Desk

''A delirious Freudian dream, a parable of toxic masculinity' ~ Time Out

'A ferocious play that grows exponentially in power as it progresses. It's the play that Woyzeck would have been, needs to be, if written in 2017... Thorne brings his pitch-perfect naturalistic dialogue to bear on a work that becomes about class, masculinity and mental health... though it's almost 200 years old, this feels like a new play, savagely laying bare an unequal world' ~ The Stage