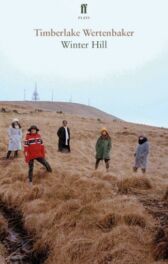 Timberlake Wertenbaker, author of the award-winning plays Our Country's Good and Jefferson's Garden questions if power can ever truly belong to the people ...

Heroism is danger and risk, and - frankly - mostly male

To meet up and have a drink with friends?

Or is it perhaps a book club intent on discussing famous heroines?

Or is it the birth of a revolution?

Set in the near future, Winter Hill centres on a eight women as they deal with the sale of local land to developers of a luxurious skyscraper hotel - soon to be the largest in Europe

To appease the local community, the developers promise a new school and social housing will also be built on the hill

However, as the money begins to run out, these plans are scrapped leading to the group meeting up in the half-built hotel to discuss what - if anything - can be done

And asks at what point does the fight for freedom become terrorism?

The play premiered at the Octagon Theatre, Bolton, in May 2017