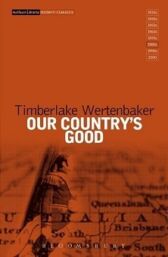 But with only two copies of the text, a cast of convicts, and one leading lady who may be about to be hanged, conditions are hardly ideal

"Rarely has the redemptive, transcendental power of theatre been argued with such eloquence and passion" ~ Georgina Brown, Independent

Our Country's Good premiered at the Royal Court Theatre, London, in 1988 and opened on Broadway in 1991