Tip of the Tongue - Reflections on Language and Meaning 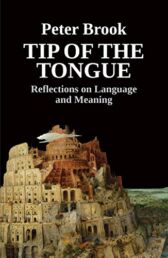 A thoughtful and deeply personal book by master theatre-maker Peter Brook, described by the Independent as " ... our greatest living theatre director"

In Tip of the Tongue, Peter Brook takes a charming, playful and wise look at topics such as the subtle, telling differences between French and English, and the many levels on which we can appreciate the works of Shakespeare

He also revisits his seminal concept of The Empty Space, as he considers how theatre and the world have changed over the span of his long and distinguished career

Threaded throughout with intimate and revealing stories from Brook's own life, Tip of the Tongue is a short but sparkling gift from one of the greatest artists of our time

The Quality of Mercy - Reflections on Shakespeare

Tip of the Tongue - Reflections on Language and Meaning