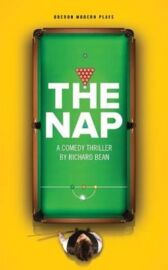 Large Mixed Cast
"He's in heaven, he's in the second round, he's in his own town, not wearing a dressing gown, he's the son of his folks, it's Dylan Spokes!'

The Nap is a very funny look at the world of snooker (the British version of pool) from multi-award winning writer of One Man, Two Guvnors

Dylan Spokes, a fast-rising young star player arrives for a championship tournament only to be confronted by the authorities warning him of the repercussions of match fixing

But before he knows it, Dylan's forced into underhanded dealings with a cast of wildly colorful characters

These include his ex-con dad, his saucy mum, his dodgy, quick-tongued manager

It's a fast-paced, laugh out-loud comedy thriller about love and honour where - in an exciting twist - the tournament unfolds live on stage