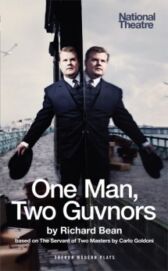 Based on Carlo Goldoni's classic Italian comedy The Servant of Two Masters, this new English version puts sex, food and money high on the agenda ...

But Roscoe is really his sister Rachel posing as her own dead brother, who's been killed by her boyfriend Stanley Stubbers

Holed up at The Cricketers' Arms, the permanently ravenous Francis spots the chance of an extra meal ticket and takes a second job with one Stanley Stubbers, who is hiding from the police and waiting to be re-united with Rachel

"A riotous farce and one of the funniest productions in The National Theatre's history ... in taking on an old Italian play, The National has not only improved Goldoni but also struck gold. 5 stars" ~ The Guardian

"An instant hit This is the most hilarious comic evening in the theatre since Noises Off, and could easily run as long" ~ The Stage

"A golden thread of theatre comedy runs all the way from Plautus to panto, from the Comedy of Errors to Fawlty Towers, with Goldoni at a crossroads between Commedia dell'Arte and modern farce ... Many layers of fun" ~ The Times