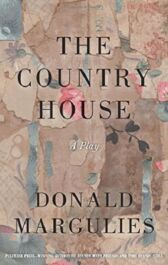 It's the Williamstown Theatre Summer Festival

And the anniversary of her beloved daughter's death

This family of actors wrestle with fame, art and - as always - each other

Secrets are spilled, bonds are broken

"One of the most disciplined and satisfying new American plays to reach Broadway in the past decade. A truly affecting play" ~ Terry Teachout, Wall Street Journal

"The Country House takes its mother-son rift, its themes of art and ego and unrequited love, and even its bucolic setting from Anton Chekhov, but what it most has in common with its source material is an ability to scrupulously map all the craggy contours of the human heart" ~ Mindy Farabee, L.A. Weekly

"Like Chekhov, Mr. Margulies is a specialist in rueful regrets and misty glimpses of roads not taken" ~ Ben Brantley, New York Times

This is the THEATRE COMMUNICATIONS EDITION - for the DPS ACTING EDITION, click here