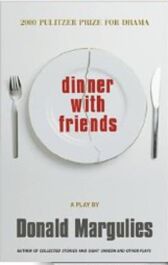 WINNER OF THE 2000 PULITZER PRIZE

Although it seems to be treading on familiar ground, Dinner keeps changing its perspective to show how one couple's breakup can have equally devastating effects on another's stability

"Two married couples have been best friends for years. In their Connecticut home, Karen and Gabe, international food writers, are giving a dinner for Beth and Tom, which he doesn't attend

It emerges from the heartbroken Beth that he has left her for another woman. Gabe and Karen are almost as crushed, having expected to grow old and fat together, the four of us. When Tom shows up at his home in the next scene, late at night, he is enraged that Beth broke the news of their breakup in his absence

Late as it is, he rushes over to his friends in the next scene to present his side of the story. Act Two begins with another dinner, twelve and half years earlier, in a summer house on Martha's Vineyard, where Karen and Gabe are introducing Beth to Tom

Then we skip five months after the events in Act One, as Beth reveals to Karen...that she has fallen in love with an old friend whom she intends to marry... Later that day, in a Manhattan bar, Tom, a lawyer, tells Gabe about his [newfound] happiness, to which Gabe reacts sourly.

Still later that night, Gabe and Karen are going to bed in the Vineyard house, and discuss the Tom-and-Beth situation, as well as their own [marriage]...clinging to it like the shipwrecked to their raft ... From this already you can gather that there is skillful construction here, as well as keen psychological insight" ~ New York Magazine

"A breezy comedy of modern manners that turns poignant and deeply affecting by its end. Margulies touches chords that resonate with a deep affecting humanity" ~ San Francisco Examiner