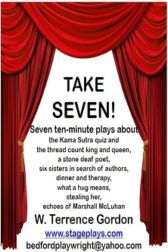 A social club meeting has scheduled a Kama Sutra quiz that quickly reveals many surprises. When the discussion turns to sex and bed sheets, skepticism around advertising with claims for the sensual benefits of high thread counts looks as if it might be resolved by the ancient text, but not until action speaks louder than ads.

A feisty young actor, a self-styled poet, a quiet wife who adores him, until his vanity and selfishness compromise whatever value his work may have and threaten their relationship. In the course of one afternoon, their three lives are touched by their chance meeting with each other and with a statue.

3 - SIX SISTERS IN SEARCH OF AUTHORS

There is much at stake for Chekhov and Pirandello as a rehearsal for a ten minute play with fourteen characters, or perhaps fifteen, gets underway. At one point, a play within the play within the play is put into play. A stage hand in the main play turns out to be the only character with an understanding of "the fourth wall." Tennessee Williams does not appear but provides the denouement, if there is one.

Dolores goes on a first date with Martin, not knowing that he is a psychotherapist. Neither one seems capable of cutting short a dinner that quickly turns into an unscheduled therapy session, until Martin discovers why he should not be dating Dolores.

When Tom's wife dies, a visit from Nan, her best friend of years ago, awakens a troubling memory. He rejects his friend Conrad's insight into why the memory is making him hostile toward Nan. When they meet a second time, Nan reveals memories of her own that confirm Conrad's insight and banish Tom's hostility.

A procession of male and female characters openly admit that they have stolen the life partners of others and even more freely admit to the consequences.

This intense portrayal of the eloquent media guru McLuhan's descent into speechlessness, visited on him by a stroke, evokes the very insights he was no longer able to teach. Dialogue is used sparingly and alternates with poetry readings and extensive use of mixed media.