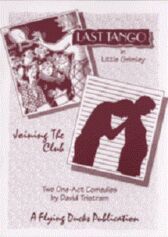 Last Tango is one of the most successful short comedies ever produced for the amateur stage, having clocked up over 1000 performances in just three years

It's especially suitable for festivals, or as an aperitif for other productions

It requires no set, no complex lighting, and very few props

What you do need are four talented actors (two male, two female) and a director with a keen sense of fun and a love of fast-moving visual and verbal comedy

The Little Grimley Amateur Dramatic Society is in trouble

Membership has dwindled to four, the audiences aren't much bigger, and if they don't come up with some rent money soon, they're going to be thrown out

"There's only one thing that sells tickets these days," argues chairman Gordon, "Sex!"

But how will the locals react?

Last Tango is designed to be customised so be sure to change the "Little Grimley" in the title to the name of your own town or village, and add a sprinkling of local references for extra spice.

This is the night that Jenny plans to reveal the results of her home pregnancy test to her husband, Tom

But Tom has some startling news of his own!

Due to its success, Last Tango in Little Grimley has spawned four sequels: