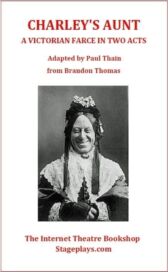 "The World's most popular Comedy"

It was first performed at the Theatre Royal, Bury St Edmunds in February 1892 and quickly transferred to London's Globe Theatre where it broke the record for the world's longest-running play, clocking up 1,466 performances

But although the central conceit is as theatrical and funny as ever, after more than a 120 years, its three-act structure and laboured humour urgently needed a make-over

And here it is!

"A chap in the bedroom? In need of hairpins?"

This New Version by Paul Thain retains all the fun of the original but re-works it for a modern audience, conflating the original three acts to two and enlivening the stale dialogue to give much needed pace and energy

"We need to impress, Brassett. A cheese and pickle sandwich will not do."

But when her visit is postponed and they're without a chaperone, rather than cancel the lunch party, Charley and Jack persuade their fellow student Lord Fancourt to impersonate the Aunt

"We're so excited to show it to people ... the script is hilarious and so funny ~ Jimmy Walters, Proudhaddock Productions

AUDIENCE 1: Believe it or not, the Second Act is even funnier