A Raisin in the Sun - STUDENT EDITION 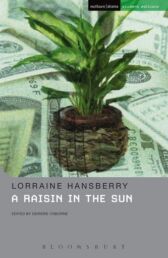 Large Mixed Cast
A Raisin in the Sun is a classic American play: a groundbreaking 1950s civil rights drama and has a strong claim to be the greatest play of the black American experience

Deeply committed to the black struggle for equality and human rights, Lorraine Hansberry's brilliant career as a writer was cut short by her death when she was only 34

She was also the first person to be called "young, gifted and black"

The play is set in south side Chicago, where Walter Lee, a black chauffeur, dreams of a better life, and hopes to use his father's life insurance money to open a liquor store

Humane and heart-rending, the play depicts characters and a whole society with complexity and reality

This Student Edition features expert and helpful annotation, including a scene-by-scene summary, a detailed commentary on the dramatic, social and political context

It also examines the themes, characters, language and structure of the play