A Raisin in the Sun - METHUEN EDITION 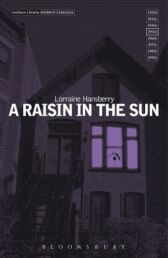 She was also the first person to be called "young, gifted and black"

Deeply committed to the black struggle for equality and human rights, Lorraine Hansberry's brilliant career as a writer was tragically cut short by her death when she was only 34

Her great play is set In south side Chicago where Walter Lee, a black chauffeur, dreams of a better life

Mr Lindner, a representative of the all-white neighbourhood, tries to buy them out

Walter sinks the rest of the money into his business scheme

Only to have it stolen by one of his partners

Finally, with the help of his wife, Walter finally finds a way to assert his dignity

For the STUDENT EDITION with Notes & Commentary
click here