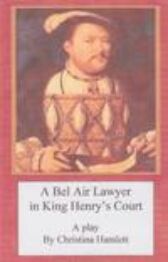 As the play opens, the arrogant monarch's supper is interrupted by the unexpected arrival of a visitor from the future-a fast-talking Jewish lawyer who will be representing Catherine of Aragon's interests in the impending divorce proceedings

Skeptical at first, then angered by this stranger's brash declarations, Henry is nonetheless intrigued by the newcomer's suggestion that five more women after Catherine will hold the title of Queen