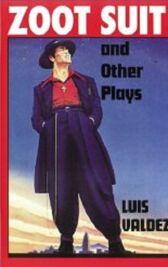 With his many successes Valdez has remained a rebel and an innovator, as well as the re-creator of Hispanic traditions

And I Don't Have to Show You No Stinking Badges!explores media images of Hispanic through a staged recreation of the TV situation comedy genre