You Should Be So Lucky 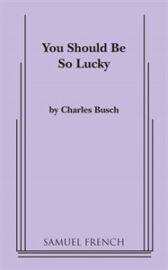 A timid young electrologist's act of altruism leads to a ten million dollar inheritance, but only after he accidently shocks his benefactor, the elderly Mr. Rosenberg, causing a fatal heart attack

Rosenberg's fiercely materialistic daughter resents sharing her inheritance with Christopher and they do battle on the Oprah like Wanda Wang Show. The plot becomes even more outrageous when Christopher's flamboyant sister and Mr. Rosenberg's ghost appear

"Busch is one of New York's territorial treasures" ~ Rex Reed