You Could Die Laughing! 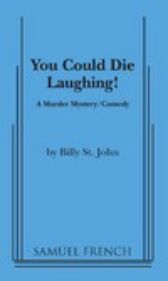 Television mogul Jacque St. Yves invites eleven has been comics to his island lodge off the Canadian coast to audition for the central in role his new TV series

It's an opportunity to die for ... and that is someone's intention!

Shortly after arriving, the comics find they are stranded along with the pilot of St. Yves's private jet, the attractive flight attendant and the couple employed as housekeeper and handyman

That night, the housekeeper disappears during a violent thunderstorm and her husband drops dead after ingesting candy that any of them could have sampled