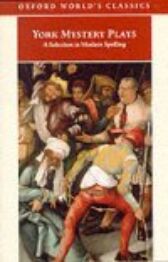 This volume is the only paperback to offer the main body of the plays which make up York's famous Corpus Christi cycle, offering 22 of the central pageants

The York cycle is the oldest and best-known of the English mystery cycles, and its depth and scope are reflected in the selection printed here

The selection emphasises the scope of the oldest and best-preserved of the English Mystery cycles, and the modern spelling, detailed notes, and general introduction make the volume particularly useful for both readers and actors

The shape of the cycle was governed by subject matter of enduring spiritual significance, both to its contemporary audience and in later literary and artistic tradition, and the selection reflects these concerns.

Included are plays on the Creation, the Fall of Man, the Incarnation, Passion, and Resurrection of Christ, and the Last Judgement

As well as providing detailed annotation, this edition offers an introduction which examines the history of the cycle and discusses the immensely popular modern productions in York and elsewhere