Year of the Fat Knight - The Falstaff Diaries 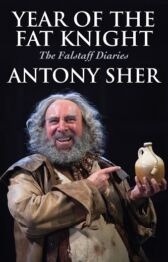 In 2014, Sher - now in his sixties - was cast as Falstaff in Gregory Doran's Royal Shakespeare Company production of the two parts of Henry IV

Both the production and Sher's Falstaff were acclaimed by critics and audiences with Sher winning the Critics' Circle Award for Best Shakespearean Performance and the shows transferred from Stratford to London, and then to New York, where Charles Isherwood in the New York Times described Sher's Falstaff as "one of the greatest performances I've ever seen"

Year of the Fat Knight is Sher's account splendidly supplemented by his own paintings and sketches of researching, rehearsing and performing one of Shakespeare's best-known and most popular characters

He tells us how he had doubts about playing the part at all, how he sought to reconcile Falstaff's obesity, drunkenness, cowardice and charm

On the way, Sher paints a uniquely close-up portrait of the RSC at work

Year of the Fat Knight is a terrific read, rich in humour and with a built-in tension as opening night draws relentlessly nearer

All in all, it is destined to rank with Year of the King as one of the most enduring accounts of the creation of a giant Shakespearean role

"Antony Sher's insider journal is a brilliant exploded view of a great actor at work modest and gifted, self-centred and selfless a genius capable of transporting us backstage" ~ Craig Raine, The Spectator (Books of the Year)