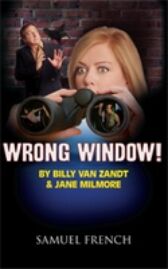 After they draw their torn curtain, the lady vanishes, and suspicion places murder beyond a shadow of a doubt

"If you're a fan of Rear Window on screen, you'll award Wrong Window on stage a perfect 10. A barrage of gag-filled dialogue. Knee-slappingly funny from start to finish!" ~ Philip Dorian, Two River Times

"Fever-pitched one liners, puns, slapstick, pratfalls ... There are probably no people in America more adept at conveying these classic comic styles than Van Zandt & Milmore, with their wacky anything for a laugh adventuring and willingness to toss all actorly dignity out the window!" ~ Tom Chesek, Asbury Park Press