Writer's Cramp or How Will Shakespeare Got Into Show Biz 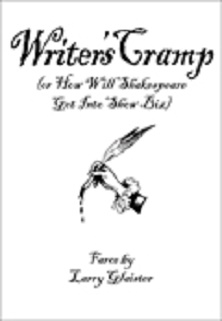 Shakespeare was born in 1564, but after early adolescence, historians lose track of him until 1590

By then he's already married, the father of three and a full-fledged, wildly successful young actor and playwright!

The "lost years" have confounded scholars for generations

Writer's Cramp or How Will Shakespeare Got Into Show Biz gleefully fills in the gaps!

Small wonder then his older and long-suffering wife, Anne, is easily distracted by the amorous attentions of Hamnet - a profligate neighbor with insatiable appetites

But how can they consummate the attraction when Will is always underfoot?

But the steamy tryst is spoiled by one intrusion after another...

And a band of strolling players

But in the end fortune smiles on the aspiring young poet