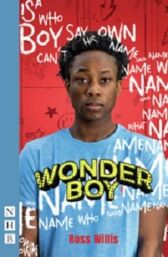 Living with a stammer, he is finding his way in a world ruled by vicious vowels, confusing consonants, and the biggest beast of all – small talk

His only escape is with a comic-book hero of his own creation, who helps Sonny soar above his reality

But when he's cast by the headteacher in the school production of Hamlet, he soon discovers that language is power – and the real heroes are closer than he thinks

Wonder Boy, Ross Willis's play about the power of finding your own voice, premiered at Bristol Old Vic in March 2022, directed by Sally Cookson

Audaciously inventive, sparky yet sensitive, giddily enjoyable... an extraordinary exploration of adolescence... Willis can make quotidian detail startling... Even the stage directions ping... Willis's play unfolds itself in miraculous ways. It's some kind of wonderful ~ Guardian

Few things in theatre can match the electricity of a first-night crowd that believes what they've just seen will join the canon. Wonder Boy, by rights, should be on the school curriculum tomorrow... Willis' writing has all the roguish energy of a Year 8 inner-city classroom... Willis has a terrific theatrical imagination and his dialogue also sizzles... a work designed to celebrate and find joy in overcoming adversity. You can't help but be washed along with it ~ WhatsOnStage

A welcome treat... as heartwarming and as it is heartbreaking... impressive stuff ~ British Theatre Guide