Women Playwrights - The Best Plays of 1998 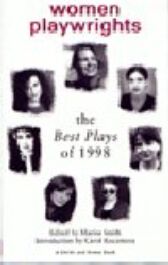 American theater has evolved from its traditional "old-boys monopoly"

Many of the brightest, and vibrant directors are now female - and hold major positions of power throughout major companies. Similarly, there are many talented, vibrant female playwrights. While the names of the playwrights in this collection aren't household names - they deserve to be thanks to their incisive and confrontantional writing

Wendy MacLeod, whose dark comedy The House of Yes was made into a movie, weighs in here with a graceful, evenhanded, surprisingly funny meditation on the abortion debate, The Water Children, should be better known

Jill Morley, has achieved some notoriety in the fringe-theater world with her semi-autobiographical True Confessions of a Go-Go Girl, an vivid, clear-eyed work in which Morley, forced into the skin trade to pay her bills, dissects the world of strip clubs and go-go dancing. Also in the anthology are plays by rising but still mostly unknown stars including Erin Cressida Wilson, Aviva Jane Carlin, and Val Smith