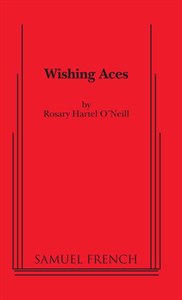 Wishing Aces was named a top new contemporary comedy by Seattle New Plays Network, given a Fulbright Award for Paris Louisiana Exchange, and performed at the Cartoucherie Theatre in Paris and in Moscow ...

A Southern comedy about mature love found later in life, and the trouble and insight that such discoveries can bring

Though well-warned, Kitten, a runaway housewife, decides to travel with her Tulane professor, Beau, on a train trip through the Louisiana swamp

Their plans are upset when her son, Bunky, in an effort to punish her, shows up as a stowaway on the train

Kitten and Beau struggle through their disappointments, mourning the futility of their lives, while the hurricane brewing outside the train builds toward its inevitable whirlwind of destruction

Who will this new age woman choose?

Set in an empty Gothic station somewhere in Louisiana

"Aces is a wonderfully evocative comedy that is Southern to the coreit has four quirky characters each of whom is vividly painted by the playwright with striking features artfully disclosed in picturesque southern repartee that is replete with clever comic barbs The relationship between the characters developed in the easy-flowing dialogue is beautifully evolved by Mrs O'Neill's well-devised 90 minute play" ~ Joseph Larose, Clarion Herald