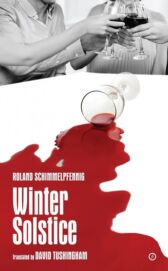 Roland Schimmelpfennig is Germany's most performed playwright and one of Europe's most original voices, with productions worldwide in over 40 countries

Bettina's mother is staying for the holidays

Not least because Bettina's mother met a man on the train

And now she's invited him around for drinks ...

Family, betrayal and the inescapable presence of the past reverberate through this dark, razor-sharp comedy

★★★★★ "Roland Schimmelpfennig may not be a name that trips off the tongue, but it is one that should stick in the mind since, in Winter Solstice, he has written the most exciting new play I have seen in years... Schimmelpfennig's writing, in David Tushingham's pitch-perfect translation, and the expertise and commitment of the cast make for an evening as electrifying as any epic" ~ The Express

★★★★★ "The visit of the unexpected stranger is a familiar element of drama as with Goole in Priestley's An Inspector Calls or with Goldberg and McCann in Pinter's The Birthday Party in both of which plays the stranger challenges the status quo and leaves it utterly changed. This is also the premise of Roland Schimmelpfennig's brilliant new play Winter Solstice in a clever translation by David Tushingham ... As with Priestley and Pinter there is a metaphor at work though a quite subtle one ... Winter Solstice, like An Inspector Calls leaves one unsure who the visitor really is his mystery is intact" ~ London Theatre 1

★★★★★ 'Twas the night before Christmas and all through the house, a fascist went raving, spewing out essentialist propaganda within earshot of his unwitting, awkwardly polite hosts' young child ... Schimmelpfennig's masterstroke is not in constructing this compelling situation though, but in how he has his characters describe their actions as they perform them. The cast not only speak their lines, they speak their stage directions too, allowing a whole world of concealed frustrations, desires and anxieties to surface in bursts of delectably dry comedy ... An exciting, experimental German import full of biting satirical humour" ~ The Stage