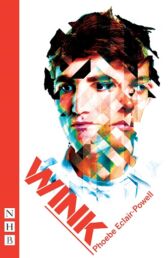 "I am wired, awake, my mind full, my eyes fuller. I google him because for some reason he's never not a bit in my brain, he's sort of what I think I would like to be, maybe, Mr. Martin. And he's there"

Except in an age of twisted technology and possible profiles, the life Mark really wants is only a click away

But what happens when that life already belongs to John?

In an age of ever-increasing advances in technology where methods of communication are dominated by the internet, Wink explores if we ever really know who we're talking to online

But how much can we find out using the internet?

And when do we know what's real and what's false?

Two interlinking monologue are fuelled by an electrifying mix of music and movement as Wink looks at two lives veering dangerously close to collision, asking us what separates the man from the boy and how young males confront feelings of dissatisfaction and isolation

"Whip-smart, chokingly funny and thoroughly entertaining, Phoebe Eclair-Powell's debut play delves into the real and online lives of two young males. Mark is 16, emotionally disconnected from his grieving family after the sudden death of his father, and doesn't quite fit in at his private school where he's on a sports scholarship. John is the French teacher whose good looks and swagger make him an object of fascination to Mark, who wants to be just like the older man

But appearances can be deceptive, and although Mark thinks he'd like to have some or all of what John has got, including confidence, sexual attractiveness, a long-term relationship (with a girlfriend called Claire) and a flat, he doesn't realise that his teacher is as walled up and cut off as he is himself" ~ The Guardian