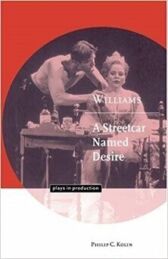 One of the most important plays of the twentieth century, A Streetcar Named Desire revolutionised the modern stage

This book offers the first continuous history of the play in production from 1947 to 1998 with an emphasis on the collaborative achievement of Tennessee Williams, Elia Kazan, and Jo Mielziner in the Broadway premiere

Interpretations by Black and gay theatre companies also receive analyses and transformations into other media, such as ballet, film, television, and opera and form an important part of the overall study