Wiley and the Hairy Man - MUSICAL 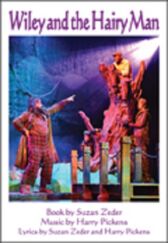 Large Mixed Cast
Set deep in the Tombigbee swamp, this classic tale of a very young boy with a very big fear is brought to new and vibrant life in this musical version

The story centers around a fatherless young boy, his conjure-woman mother, his faithful dog and the Hairy Man who haunts Wiley's days and dreams

The addition of music and song deepens the characters, intensifies the excitement and creates the mysterious magic of the swamp with a distinctly bluegrass sound

Mammy reveals how she learned the arts of conjuring from her own Mammy in a music hall number, "Conjure Woman"

Wiley's battle seems all but lost until he finds a courage born of desperation in the show-stopping, swamp-rap "Bring it ON!"

NOTE: Score and an Accompaniment CD are available to Rent

THIS IS THE MUSICAL VERSION - for the PLAY VERSION
click here