Who's Afraid of the Working Class? 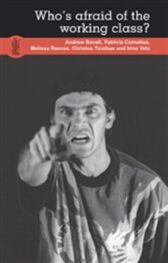 Five plays are intertwined in one in this story of fringe dwellers, living in an age of social, economic and moral deprivation

Mostly without work, and politically disengaged, they work at survival

Who's Afraid of the Working Class? was adapted into the film Blessed

"With intelligence, well-judged humour and the searching qualities of truly memorable theatre, the play peels away political propaganda and notions of correctness to present a candid, difficult, searing portrait of the poor and marginalised" ~ SMH