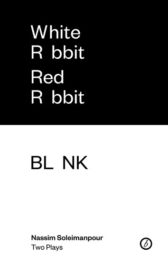 The monologue White Rabbit Red Rabbit has been translated into over 30 languages and performed over 1000 times by some of the biggest names in theatre and film, including actors Stephen Rea, Sinead Cusack, John Hurt, Whoopi Goldberg, Nathan Lane and Ken Loach

"The play is performed by a different actor every day at the Edinburgh festival and handed to you in a sealed envelope as you step on stage. Neither the actor, nor the audience, have any idea what is to unfold over the following hour.

The script begins in the first person, as I address the audience. Straightforward so far; as an author I'm used to public readings and the script in my hand is a lifebelt. As long as I can cling to the written words, there is a sense of safety. If I just keep reading, line after line, I will not be left standing alone under the lights groping for words

But the text is more playful than this. It quickly becomes apparent that the "I" speaking on stage is not me, but the playwright. Soleimanpour is unable to leave Iran. He is not allowed a passport, because he refused his military service, so instead he travels through his words, using the performer as a conduit. There are moments when he instructs me, through the text, to involve the audience. Through this he subtly questions our ideas of complicity and obedience, our passivity and the notion of control, but he handles these ideas with humour. Imagine my feelings when I turn the page to find that I am to impersonate an ostrich

As the performer, these interactive moments were the most heart-in-mouth: audiences are unpredictable, and there's every potential for the show to veer off course. We are all at the mercy of this puppet master who is trapped in his own country. Soleimanpour, who wrote the play in 2010 at the age of 29, reiterates his email address throughout; he wants us to contact him, to send him photos. In this way, he says, he can feel he has shared our experience. The only thing more frightening than being on stage with no words, it turns out, is having so much to say and no stage on which to express it. Soleimanpour has found an ingenious way around this, and it was a privilege to have been part of his experiment" ~ Stephanie Merritt

BLANK is a joint effort between audience and performer, the gaps in the script filled in to reveal a story that celebrates the human imagination.

As formally inventive as it is engaging, BLANK reverses the typical theatre experience.

'"A clever, subversive piece about the slipperiness of language and meaning that has been translated into over 30 different languages" ~ The Guardian on White Rabbit Red Rabbit