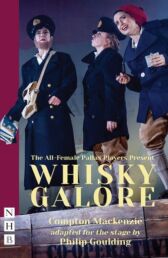 It's 1955 and the Pallas Players, an all-female theatre company, are putting on their stage adaptation of Compton Mackenzie's much-loved classic novel Whisky Galore

In so doing, they transport us back to 1943 and the Scottish islands of Great and Little Todday, where the whisky supply has dried up because of the war

But relief seems to be at hand when a ship carrying 50,000 bottles of whisky is wrecked just offshore

"Philip Goulding's adaptation retains the authenticity of Mackenzie's mellifluous prose and wittily divvies up twenty-five characters among a hard-working cast of seven. An enjoyably bright and breezy re-telling of a classic comic tale" ~ The Stage