When I Snap My Fingers & Mary Mary - Two One-act Farces 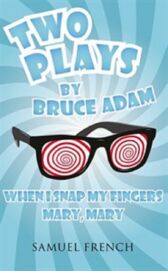 With both Simon and Maria still susceptible to the key words, some very odd behaviour results which makes Simon's future look more vulnerable than ever

Little does he suspect his mother has already invited his colleague - a third Mary! - round in the hopes of setting her up with her son

Each of these once-act farces runs about 60 minutes