What Happened to Sam Disney? - An Interactive Kidnap Mystery Game 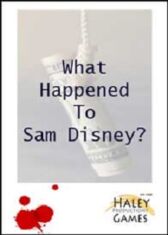 Eccentric, reclusive millionaire Sam Disney is alone in this world with his millions

So, he's come up with a plan, a way to leave his money to someone

He draws Gotham City from what he calls his lottery to bequeath his money to. All townsfolk will receive a financial gift and one lucky person will receive a briefcase containing $1,000,532.00

Sam Disney: The mysterious, eccentric millionaire (WE NEVER MEET HIM; YOU DO NOT NEED AN ACTOR TO PLAY THIS ROLE.)

Flora Fauna: A homeless woman who do anything to get off the streets of Gotham City

Horace Tabbeyville: Gotham City's mayor, in for the reelection fight of his life

Cain Able: The cash-strapped Hollywood producer who's on the brink of becoming a Has-been in Tinseltown

Mamie-Eve Dempsey: A publisher and a psychic. How's that for a unique combination? But she was recently fired from her publishing job so now she's just an unemployed psychic

Detective Mattie Jiggs: She'll only be called in if something evil and dangerous happens

Georgie Gurl: Mamie's psychic assistant - even as a novice, she's even more powerful than Mamie. Mamie knows this and will never let her show her true power in public

Frances Noodle: Cain's personal assistant who is treated with no more respect than that of a slug

Reporter Red Gablian: He's covering this story in the hopes that it'll catch the attention of some major newspaper and get him out of this forsaken town he's forced to call home

Josh Lyman: The Mayor's press secretary. Josh has big aspirations, namely he wants to be press secretary for the president of the US. The story could get him noticed if he can make the Mayor behave like a mayor and not the moron Josh believes him to be

Hattie: Flora's friend from the streets. She considers Flora her best friend. She is certain they know everything there is to know about each other and they always watch each other's backs on the streets. She doesn't know how she'd survive without Flora

What Happened to Sam Disney? - No murders, kidnapping only - includes a mini-scavenger hunt