What Do We Need To Talk About? 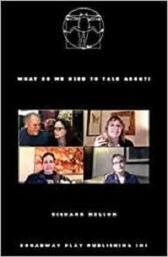 In the midst of our unsettled world, The Apple Family - last seen in 2014 - make their return

Though not over the dinner table but this time via Zoom

They talk about grocery shopping, friends lost, new ventures on a hoped-for horizon, all during a time when human conversation (and theater) may be more needed than ever before

"The first great original play of quarantine" ~ The New Yorker

"The best example of Zoom theatre I have watched so far" ~ The Guardian, Five Stars