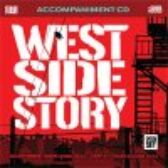 Composed by Leonard Bernstein with lyrics by Stephen Sondheim, West Side Story is a collaboration by two masters of the American musical

The Dance at the Gym

One Hand, One Heart

Please note, this is NOT the Original Cast Recording and