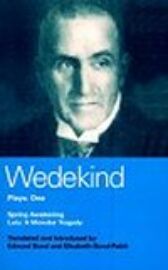 Wedekind's expressionist plays influenced the whole course of modern drama. A moralist who wore the mask of an immoralist, Wedekind was the terror of the German bourgeoisie

His work was censored and the original Lulu play was not even published during his lifetime; Wedekind toned it down and adapted it to make two plays: Pandora's Box and Earth-Spirit

The version in this volume, Lulu: A Monster Tragedy, is based on the first manuscript, presenting the original sexually voracious heroine to a British audience for the first time.

The volume also contains Spring Awakening, 'a work of great compassion that still has a lot to teach us about the dangers of battening down adolescent sex...' - Guardian

The translation of Spring Awakening ('scrupulously faithful both to Wedekind's irony and his poetry' The Times) was commissioned by the National Theatre and that of Lulu: A Monster Tragedy ('the Bonds' version is sharper and funnier than its predecessors' Guardian) was toured nationally

Both plays are complemented by the translators' historically illuminating introductions