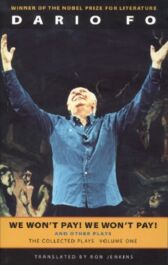 Winner of the Nobel Prize for Literature

In the words of his translator, Ron Jenkins

"The Nobel committee's decision to honor Fo as a master of literature is a historic tribute to the theatre, which is still viewed by many as literature's bastard child; it is also the first time that the Nobel for the literary arts has been awarded to an actor. This courageous and controversial choice indirectly expands the modern definition of literature to include the power of the spoken word"

The plays in this volume are:

In her effort to keep her secret from her husband, she hides some of the groceries under her best friend's raincoat

Her husband and his friend the accomplice's husband notice the bulge, of course; but they believe the explanation that the accomplice is pregnant!

Hilarity is piled upon hilarity as the characters try to extricate themselves from the mess they have gotten into. Eventually, they all unite to support the spontaneous resistance to eviction in their housing project

"The work of a social reformer with a fractured funny bone . . . Mr. Fo's manic farce should be obligatory viewing for anyone battling, i.e., succumbing to, the high cost of living" ~ N.Y. Times

A fast-moving farce, with bedroom mix-ups and officious officialdom, similar to those crafted by such French farceurs as Georges Feydeau and Eugene Labiche

When Agnelli is disfigured in a failed kidnap attempt, he is rescued by Antonio, one of his Fiat employees

Antonio flees the scene when people start shooting at him, leaving his jacket on Agnelli's body

Agnelli is taken to hospital in Antonio's jacket, where he mistakenly has his face reconstructed in Antonio's likeness ...

Elizabeth is this aging, forgetful monarch, see, who is obsessed with appearances. She is also suspicious of artists such as Shakespeare, who has written a play about some Danish prince which Elizabeth is convinced is really about her

The play is performed for her in a hilarious parody of Hamlet, strained through the garbled pidgin English of Mama Zaza, a drag queen who has earlier told us that the play we are about to see has absolutely nothing to do with Reagan

"Fo nails pretension and political chicanery with ridicule, laughter, sarcasm, irony and the grotesque ... This being Fo, the play is rich with raunch and scatology may offend the unwary. But for Fo converts, it's a must, just as it's an ideal introduction to one of the world's funniest theatre satirists" ~ Variety