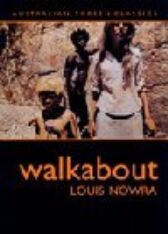 Nicolas Roeg's Walkabout opened worldwide in 1971. Based on the novel of the same name by James Vance Marshall, it is the story of two white children lost in the Australian Outback

They survive only through the help of an Aboriginal boy who is on walkabout during his initiation into manhood. The film earned itself a unique place in cinematic history and was re-released in 1998

In this illuminating reflection on Walkabout, Louis Nowra, one of Australia's leading dramatists and screenwriters, discusses Australia's iconic sense of the outback; and the peculiar resonance that the story of the lost child has in the Australian psyche

He tells how the film came to be made and how its preoccupations fit into the oeuvre of both its director and cinematographer Nicolas Roeg, and its screenwriter Edward Bond. Nowra identifies the film's distinctive take on a familiar story and its fable-like qualities, while also exploring the film's relationship to Australia and its implications for the English society of its day

He recognizes how relevant the film is to the contemporary struggle to try and find common ground between black and white Walkabout, says Nowra, 'destroyed the cliché of the Dead Heart and made us Australians see it from a unique perspective, as something wondrous, mysterious and sensuous. It took a stranger in a strange land to reveal it to us'