Wales and the Cinema - The First Hundred Years 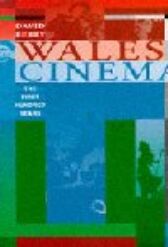 Published by University of Wales

This book of lively and provocative essays, written by dramatists and professionals active in drama teaching, theatre research and/or theatrical practice in Wales, examines significant developments in theatre in Wales from the late 1970s to the present day.

'The value of this remarkable book, which is offered at an affordable price, is to remind us of Welsh theatre's richness and diversity, ranging from familiar mainstream houses to the breathtaking female-inspired companies that specialise in promoting new writing in both languages. Appendices give details of each and a good deal of background.' (Speech and Drama)

'Anna-Marie Taylor's collection of surveys, reviews, anecdotes, analyses and provocation's encompasses a wide range of performance forms and methods of discourse, and is both accessible and challenging.' (New Welsh Review)

The volume is intended as a general introduction to modern Welsh theatre and the topics discussed include the belated recognition of drama in Wales, the continuing and lively amateur tradition, Wales's particular contribution to theatre in education, the position of the theatre in a bilingual culture, the character of experimental theatre, the effect of government funding policies and the establishment of actor's training. There are also studies of individual companies.

The editor, Anna-Marie Taylor, is a lecturer in the Department of Continuing Education at the University of Wales, Swansea.