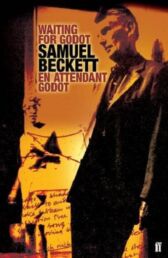 "Nothing happens, nobody comes, nobody goes, it's awful"

This line from the play was adopted by Jean Anouilh Jean Anouilh after the French premiere of En Addendant Godot in 1953 (though he .later recognised its genius)

The English premiere of Waiting for Godot was also a disaster

Peter Bull, who played Pozzo, recalls the reaction of the first night audience:

"Waves of hostility came whirling over the footlights, and the mass exodus, which was to form such a feature of the run of the piece, started quite soon after the curtain had risen. The audible groans were also fairly disconcerting ... The curtain fell to mild applause"

And the English critics were more hostile than the French

Even leading theatre critic Harold Hobson was confused and uncertain

Until (and not for the first time) legendary play-agent Peggy Ramsay changed theatre history:

"Don't be silly, dear, it's a masterpiece"

Thus reassured, Hobson's review in the The Sunday Times along with Ken Tynan's in The Observer changed everything

In a poll of 800 playwrights, actors, directors and journalists Waiting for Godot was subsequently voted "The most significant play of the 20th Century"