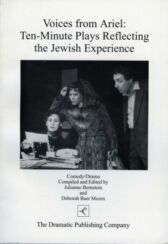 This unique collection of 10 short plays was commissioned and produced by Theatre Ariel, one of America's leading theater companies dedicated to Jewish culture through the medium of new plays

Some plays are about contemporary Jewish life, others are about Jewish women, while the rest are based on stories and characters from the Old Testament, giving them a theatrical and very modern up-to-date twist

A recent convert tries to rally support from family and friends.

In Spite of Everything ~ Hindi Brooks - F2

An Interview With a Scapegoat ~ Louis Greenstein - M1,F1 or M2 or F2

In this clever Midrash biblical interpretation, a Reporter is taken to task when she tries to get her story on the hottest goat in the wilderness!

A young woman enters a newspaper office to place a personal ad.

A disquisition on cigars, memory and the Sabbath

'Til Death Do Us Plots ~ Julianne Bernstein M1,F2

A young man who has given up his faith is haunted in the middle of the night by the spirit of his long-departed bar mitzvah coach, Cantor Birnbaum