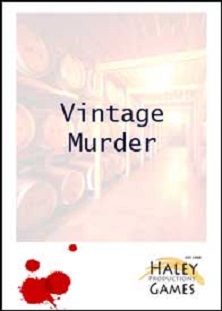 The historical winery, known for it's rare but excellent cabernets, is being sold due to the death of its owner, Georgio Tortellini

Olive Tortellini: Georgio's eldest daughter. She wants to sell the winery and its acreage to Joe Bob Biggs, her new boyfriend. Only she can't seem to convince Carmine that her plan is a better one than selling to Gertrude Tuesday. And she can't contest the will because she'll be disinherited!

Toni (Antoinette) Tortellini: Georgio's youngest daughter. She'll do anything to hold onto the winery and carry on her great-grandfather's legacy. She does have a plan to make that happen - a plan she's already put into action

Jessie Jones: The local law (and FBI reject). She lays claim to the Tortellini Winery on behalf of her father who Georgio unjustly fired shortly before his death. She feels her father is due some sort of severance compensation after 25 years on the job and she feels he was unjustly fired. So far, Carmine, as executor, is rejecting her claim

Carmine Blanca: He became Georgio's driver after giving him a ride when his car broke down in the Nevada desert. Everyone but Carmine(??) was surprised when Georgio made Carmine executor of his estate and thus a millionaire (due to the 5% executor's fee)

Joe Bob Biggs: He's a land developer who owns the acreage neighbouring winery and wants the winery's land to build a large (and need we say garish?) strip mall. He was hoping Olive would be his ace in the hole but she's proving otherwise

Nigel Tuesday: A lily-livered mama's boy who's often taken advantage of because of his wealth tied with his inability to say no. He's gotten himself into quite a dilemma and needs the sage of advice of his mother. Unfortunately, Gertrude is gambling in Reno right now and not answering her pages. It's making him frantic

Dr. Jacobi: Olive's shrink who advises her and talks her through her "stressful" situations

Barney Schneckel: Jessie's new and enthusiastic trainee who is too much of a newbie to see that Jessie is out of line by raiding the party to investigate a murder that hasn't even happened yet. He's like a puppy dog who only wants to please. Think Barney Fife from The Andy Griffith Show

Zach Henry: The winery's sexy gardener and Toni's boy toy. They clearly lust after each other but do their best to keep their relationship under wraps. He is her staunchest defender