Vincente Minnelli - I Remember It Well 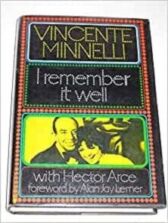 In this profusely illustrated autobiography, the Academy Award-winning director traces his life from his childhood days to sharing the triumphs of one of Hollywood's most distinguished careers

Through words, as well as photographs from his family album, Minnelli also tells for the first time of his bitter-sweet marriage to Judy Garland, and shares the excitement of preparing a new film with his most treasured 'production' - daughter Liza Minnelli