Via Dolorosa & When Shall We Live? 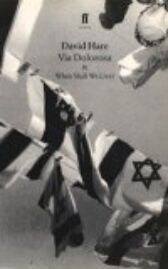 'My whole life, it's been assumed, Western civilisation is an old bitch gone in the teeth. And so people say, go to Israel. Because in Israel at least people are fighting. In Israel, they're fighting for something they believe in'

Via Dolorosa: In 1997, after many invitations, the 50-year-old British playwright resolved finally to visit the 50-year-old State of Israel. The resulting play, written to be performed by the author himself, offers a meditation on an extraordinary trip to both Israel and the Palestinian territory, which leaves Hare questioning his own values as searchingly as the powerful beliefs of those he met

Accompanying Via Dolorosa is the 1996 lecture When Shall We Live?, which also addresses questions of art and faith. Originally given in Westminster Abbey as the Eric Symes Memorial Lecture, it attracted record correspondence when an abridged version was published in the Daily Telegraph

"Hare has written a piece that, in a modest, moving way, illuminates not only the Arab-Israeli conflict but also some of the other confrontations that keep the world on the bllody edge ... such an astonishing bunch of stories, charcters and ideas that, when you leave the theatre, you feel as if you have lived through some crazy, continuing epic" ~ New York Times