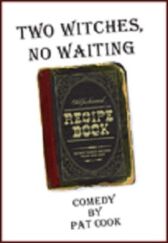 Arlene Marcus and her sister, Elzbeth, are known far and wide in South Texas as friendly, charitable and a little eccentric

It's also known that they're witches

At least, that's the story

Especially the one spread by their housekeeper, Opal Dunn

Just before she vanished without trace

Sheriff Jeb Abercrombie seems a little shy about investigating for some reason - which bothers Elzbeth, who has a crush on the lawman

Meanwhile, Arlene's son, Jeremy, tries to keep a lid on things by trying to get the sisters to sell their house

And who wants desperately to buy the property?

Of course, Sternwood didn't reckon on dealing with people who read bumps on his head, a "recipe book" full of spells and potions

And getting lost in Elzbeth's "mystery room"

Jeremy already has his hands full, so what happens when he seems to be falling in love with Bonnie, the new housekeeper?

And just who is she?

And why does she keep making reports to someone over her cellphone?

It's all a heady brew of scary and comic twists and turns, where barn owls spy on people through windows, closets fly open and even the house itself seems alive