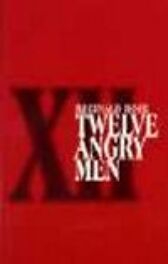 The life of another is at stake

The conflict which follows is fierce and passionate, cutting straight to the heart of the issues of civil liberties and social justice