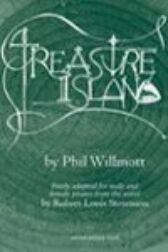 Inspired by real-life female adventurers, Phil Willmott has changed the gender of several of the central characters without compromising the spirit of Stevenson's classic novel.

The play can be simply staged, is suitable for performance by kids and adults and can be adapted to suit a large company or a small team playing several roles

"A delightful blend of the salty and the silly" ~ The Independent