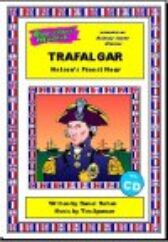 Large Mixed Cast
In 1805 the mighty French armies under Napoleon Bonaparte had conquered most of mainland Europe. He then turns his attention to invading Britain ...

In order to cross the channel his navy had to take control of the English Channel for 24 hours, but the British navy not only controlled the seas, but it was blockading his seaports

Unfortunately his Admirals weren't as as cunning as him and when that decisive battle finally occurred the brilliance of Admiral Lord Nelson, ensured a decisive British victory

Although created as a musical, Trafalgar is a fictional story with strong, exciting music accurately based on the historical facts known about this famous sea battle

A music score that your children will find hard to forget accompanies the show, making it a lively and entertaining way to learn history