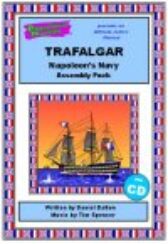 In 1805 the mighty French armies under Napoleon Bonaparte had conquered most of mainland Europe. He then turned his attention to invading Britain

In order to cross the channel his navy had to take control of the English Channel for 24 hours. Unfortunately for him, the British navy not only controlled the seas but was blockading his seaports

He devised a cunning plan to pull the British ships away from the channel and defeat them in a decisive battle. Unfortunately his Admirals we not as brave or as cunning as him and when that decisive battle finally occurred the brilliance of Admiral Lord Nelson, ensured a British victory