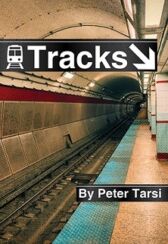 A group of strangers meet in a dirty subway station

They have arrived with limited personal belongings

Their watches have stopped

They all claim to be in different cities

And now they learn the unfortunate truth ...

They are all dead

But which platform are they on?

Consequently, they are obliged to reflect upon their lives, recalling and confessing past deeds of which they are not proud, hoping to figure out which platform is which

The arrival of someone from the other platform only complicates matters, and still the answer remains unclear

Or to have faith and climb aboard to their final destination

To Heaven or Hell

"What a concept! Great chance for actors to create some strong, individual characters. Script makes you think and has a poweful story line" ~ Natalie Saunders, Ottumwa High School, Ottumwa, Iowa

"This show left our audience in deep thought. It was fairly inexpensive to produce. The set was easy for my beginning Tech Theatre class to construct and the costumes all came from closets. The distinct characters all had specific needs and because the stakes were so high, we were able to sharpen our Troupe’s acting skills to the next level. The topic led to great rehearsal discussion - no matter what each student believed. We took this play to competition and scored a Superior! This play is memorable and solid in challenging us to make moments count through life’s brevity." ~ Lizzy Brannan, Cornerstone Charter Academy, Belle Isle, Fla

"Tracks is great one act for inclusion in a night of performances or to be used as a competition or festival piece. It is easily staged, and can be effectively produced with simple contemporary costumes and three benches. It is a perfect show for a student director because of its clear story and accessible characters" ~ Christopher Pankratz, Flowing Wells High School, Tucson, Ariz

"Tracks was a thoughtful and exciting show to produce. It gave each performer a meaty role to research and they could make bold acting choices based on their character analysis. It was a wonderful, thought provoking, and interesting show and we had a lot of positive comments from our audiences on how much they enjoyed the story and the "open" ending led to many discussions!" ~ Lea Marshall, Leon High School, Tallahassee, Fla

"An existential experience for students and audience. This play shows us how to examine the choices we make in life and how we need to be responsible for those choices even after we die" ~ Kate Trongale, Castle Park High School, Chula Vista, Calif

"A great ensemble piece for any high-school theatre group! The theme is great for explorations and discussions regarding death and the afterlife" ~ Rassika Malhotra-Risko, Governor Simcoe Secondary School, St. Catharines, Ontario, Canada

"What a concept! Great chance for actors to create some strong, individual characters. Script makes you think and has a poweful story line" ~ Natalie Saunders, Ottumwa High School, Ottumwa, Iowa